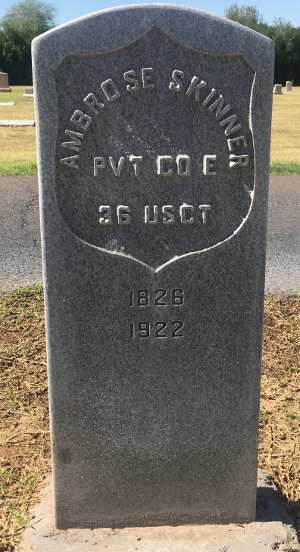 In 2011 we identified the unmarked grave of a Civil War veteran and Buffalo Soldier, Private Ambrose Skinner, who served in the 36th United States Colored Infantry. Through an arduous 2-year period, Jan Huber, our previous Graves Registration Officer, identified the next of kin and worked with the Veteran’s Administration to secure and install a U.S. military headstone for Skinner at Greenwood Memorial Law Cemetery in Phoenix.

All of the Union soldier graves that have been identified and marked so far with U.S. military headstones because of the work of our Department’s members are listed below:

Members of the SUVCW Department of the Southwest have identified a burial location and claimed, but not yet installed, a military headstone for the following Union soldiers:

Arizonans Who Were Union Soldiers

New Mexicans Who Were Union Soldiers

Beginning in 2003, the SUVCW embarked on the Last Soldier Project. The purpose of the project is to locate and appropriately mark the final resting place of the last Civil War Soldier buried in each county/parish and in each state of this great country.

Brothers of the Department’s Picacho Peak Camp proclaimed Private Parker Louis Gordon to be Arizona’s Last Union Civil War Soldier during a ceremony in on November 19, 2005, at the mausoleam at the Greenwood Cemetery, Phoenix, Arizona. Gordon was born September 1, 1847, and died December 5, 1946. He served as a private with the 154th Illinois Infantry Regiment.

After careful consideration, it has been determined Private William T. Scammahorn to be New Mexico’s Last Union Civil War Soldier.

The SUVCW Department of the Southwest participates in annual Memorial Day ceremonies held across Arizona. Some historical resources about the history of this holiday are provided below: