One of the five Allied Orders, the Woman’s Relief Corps (WRC)  was chartered 1883 as an auxiliary to the Grand Army of the Republic, Inc (GAR). It received Congressional recognition on September 7, 1962,  and has a 501c3 charity identification. 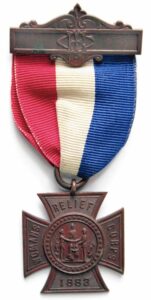 The primary goal of the WRC is to provide perpetually, curation and preservation of research, documents and records that pertain to the GAR as well as the WRC. The WRC also strives to perpetuate the memory of those who sacrificed much and sometimes all in the Civil War. It also believes a basic tenet is to provide assistance to veterans of all wars and extend needed aid to the widow(er)s and orphans of those that gave their life for freedom.